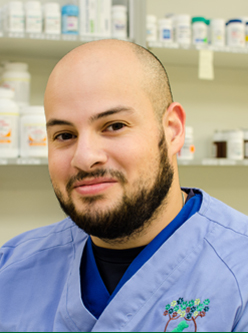 Jesse joined Dixie Animal hospital in September 2016 but has been working in the animal health industry for the past 6 years. Jesse is currently a Biology major at Miami-Dade College on his way to earning his nursing degree making him one step closer to achieving his M.D. In the past, he has volunteered at Friends Forever Rescue assisting with hospital care. He will stop at nothing to help all pets ill or injured. His unrestricted love and passion for animals keeps him motivated to move forward and overcome all obstacles. He owns two spoiled Labrador Retrievers name Leo and Lily. With his free time, Jesse enjoys reading, writing, and spending time with family and friends. 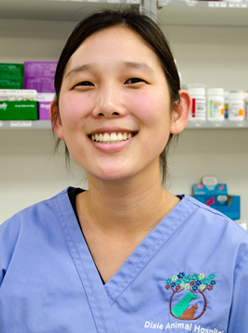 Jules joined the Dixie Animal Hospital team in September 2014. Prior to joining Dixie Animal Hospital, Jules graduated from the Veterinary Technician program at Miami Dade College in July 2014. She has since earned the title of Certified Veterinary Technician; CVT. Jules became an Assistant Laboratory/Kennel Supervisor in October 2020. Her passion for animals has been her driving factor in pursuing veterinary medicine. In the past, she has volunteered with the Cat Network, assisting them with their Meow Mobile. Jules also spent time volunteering at Zoo Miami with the children's Summer Camp program. She owns one Boston terrier named Dexter who is extremely spoiled, but hopes to bring more Boston terriers into her life in the future. With her free time, Jules enjoys spending quality time with her friends and family, reading, and going to concerts. She enjoys traveling to far-away lands such as Ireland, and hopes to continue to travel in the future, particularly to her dream destination, Italy. 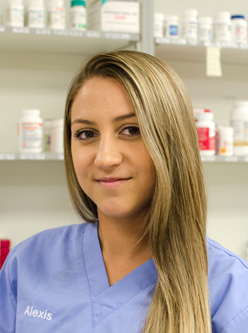 Alexis has been a veterinary nurse for 3 years and loves how rewarding it is to help care for other people’s furry family members. She recently began working with Dixie Animal Hospital in February of 2019. Alexis was born and raised in Miami. Animals have been her passion for as long as she can remember; she has worked with and helped raise several exotic animals including primates, reptiles, and big cats such as lions, tigers, jaguars, and even ligers. Currently Alexis has a dog named Nala and 2 cats named Camo and Aurora who are extremely spoiled. In her free time Alexis enjoys boating, fishing, or anything outdoors. 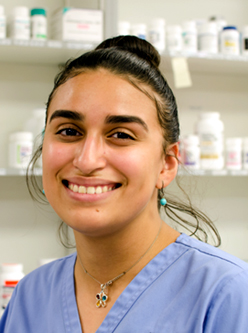 Arianna began working in the veterinary field in 2015. She attended FIU for Psychology & Biology before switching to MDC. She eventually wants to attend Veterinary School at the University of Florida and become a Veterinarian specializing in Wildlife. When she is not studying, she enjoys drawing, painting, writing (fiction & comics), Kayaking, and baking. She has four cats Kokoro, Yeager, Jambalaya, and Shiva and two dogs Buddy a Labrador and Snow an American Bulldog mix.

Finesse joined the Dixie Animal Hospital team in March 2021. Finesse has had a passion and love for animals since childhood, with her first pet being a rabbit and her first dog being a Neapolitan Mastiff. Finesse has been working in the animal industry for two years and within the first year, she became very fond of chihuahuas. Finesse is currently attending Miami Dade College to earn her BSN degree. Her goal is to become a Pediatric Nurse Practitioner in the near future and has dreams of starting an animal-related service business further down the road. Finesse has two very spoiled lovable pet dogs, Jelanie (American Bulldog), and Chase (Patterdale Terrier) and she loves cuddling with them when she goes home. When she's not studying, she enjoys spending time with family and close friends, learning kanji, reading non-fiction books, attending concerts of underground musicians, and traveling. She loves visiting her grandfather's home island, the Andros, Bahamas, and would like to pay a visit to eastern Asian countries someday.

Veronica Serrat was born and raised in Miami to Cuban parents. Her close family calls her Mussy; similar to how in Cuban Spanish a cat is called over using the term 'misu'. She has always loved and respected animals since she was able to walk. Veronica has always been interested in the veterinary field, but didn't think it was a possibility for her. Exploring the veterinary field has opened her eyes to the possibilies in the industry. Outside of the clinic, Veronica enjoys outdoor activities, traveling, weight lifting and running. She is currently attending Miami Dade College through their veterinary technology program.

Jesselyn Dominguez has been with Dixie Animal Hospital for 1 year. While attending highschool at Coral Reef, she combined her medical academy background with her love of animals to explore the veterinary industry. Jesselyn has graduated from FIU with a Bachelor's in Biology and hopes to pursue a doctorate of veterinary medicine soon. She has a passion for caring for animals including previous work with dog rescues. Jesselyn's hobbies include roller skating, reading and drawing.